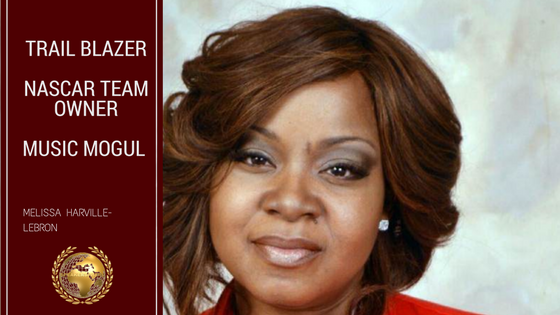 FEBRUARY 10, 2018 (NEW YORK) –  Black History month celebrates Melissa Harville-Lebron who is the first licensed, African American woman own a National level team in NASCAR’s Camping World Trucks Series. “Ms. Harville-Lebron is a pioneer and trailblazer in many arenas. With respect to NASCAR, she is poised to bridge the diversity gap on the largest stage in sports,” stated Allen L. Ellison, CEO of The Public Relations Firm, Inc.

Mrs. Harville – Lebron is the founder and CEO of W.M. Stone Enterprises, Inc. W.M. Stone is a multifarious entertainment conglomeration that is the parent company to the historical1st multicultural sibling NASCAR team; E2 Northeast Motorsports and home to Coutrá Music Group, a boutique music label with Bungalo/ UMG Distribution. The eclectic roster at one time included a female racecar driver with a phenomenal voice. This would be Melissa’s initial exposure to NASCAR and also what would capture her attention and direct her awareness to the lack of diversity in the motorsport. At that moment the conscious decision was made to pursue and fill that multicultural gap. A native of Staten Island, NY, her foundation was an overly protective mother and grandmother who embodied the entrepreneurial spirit.

Her father was consistently influential in her life, as she remained “Daddy’s little girl” while he suffered with Sarcoidosis of the brain. The drug epidemic of the early 1980’s that consumed and damaged most families during that era showed no exception to Melissa and her family. While battling her own personal demons, Melissa’s mother remained ever so committed to her breaking the negative cycle that society had already proclaimed her destiny to ensure that she became a positive product of her environment. First mentored by lifetime friend and legendary hip hop DJ Red Alert, she always had his support and admiration in her pursuit of the entertainment industry on her own terms. Being asked to accompany a friend to a video in the Bronx would prove to be two “firsts” for Melissa, one being her first industry connections that she would make on her own, and the other being her first time in the Bronx.

Completely intrigued by the chaos behind the camera she landed her first position as a Production Assistant. After being introduced to producer Jay Ellis and being able to view the music industry from a different perspective, she knew that she did not want to be an artist, but knew immediately that she wanted his job. Mr. Ellis’s influence would solidify her drive to one day be a boss. She landed what she believed to be the opportunity of a lifetime, an internship at Sony Music where she quickly assessed, “All that glitters is not gold”. The opportunity to establish her new music label, would a line her in a direct path with NASCAR. Melissa was called upon to develop an amazingly talented singer, who also embraced competitive racing.

Their brief time working on the development of the singer, captured Melissa’s attention and a love for motorsports grew. After an introduction to Melissa children, she suggested that they “Try it”. When an invitation to attend a NASCAR EXPERIENCE at Charlotte Super Speedway presented itself, Melissa shared the opportunity with the family. Her children were immediately captivated when they set their eyes upon the track. During their very first session, their top speeds of up to 150 respectively. They instantly grabbed the attention of officials at the track, who also encouraged them to pursue the possibilities. Eric, Enico & Siana Lebron, were her inspiration to pursue an opportunity to break the barriers in a male dominated sport.

Their persistent insistence encouraged Melissa to further pursue the world of NASCAR. An investment was made to have the boys evaluated in an actual testing environment. The boys proved once again that were destined for the track. Melissa has always felt that the many obstacles in life were preparation for greatness in the future. Focused on creating her own destiny, she incorporated opportunity and imagination. Accepting social accountability for the impressions we portray to our youth throughout platforms that we have access to W.M. Stone’s goal is to encourage the youth to, “Unlock their dreams and pursue the unimaginable”. The obstacles of adversity do not define your future.

Speakersphere.com is professional speaker’s bureau and asset of The Public Relations Firm, Inc. a premiere, full service marketing and public relations company specializing in multicultural marketing, branding and awareness campaign development. The PR Firm partners with the world’s leading marketers and media networks to help its clients maximize their public exposure in an effort to secure and protect their presence in the media.

For booking Mellisa Harville-Lebron for your next speaking engagement, please email agent@speakersphere.com or call 240.381.5683.

Speakersphere.com is a premier full service Speaker Bureau and asset of The Public Relations Firm, Inc. The Firm is a well-known pioneer in the speaking industry.  We are the very first marketing and branding website for professional public speakers.