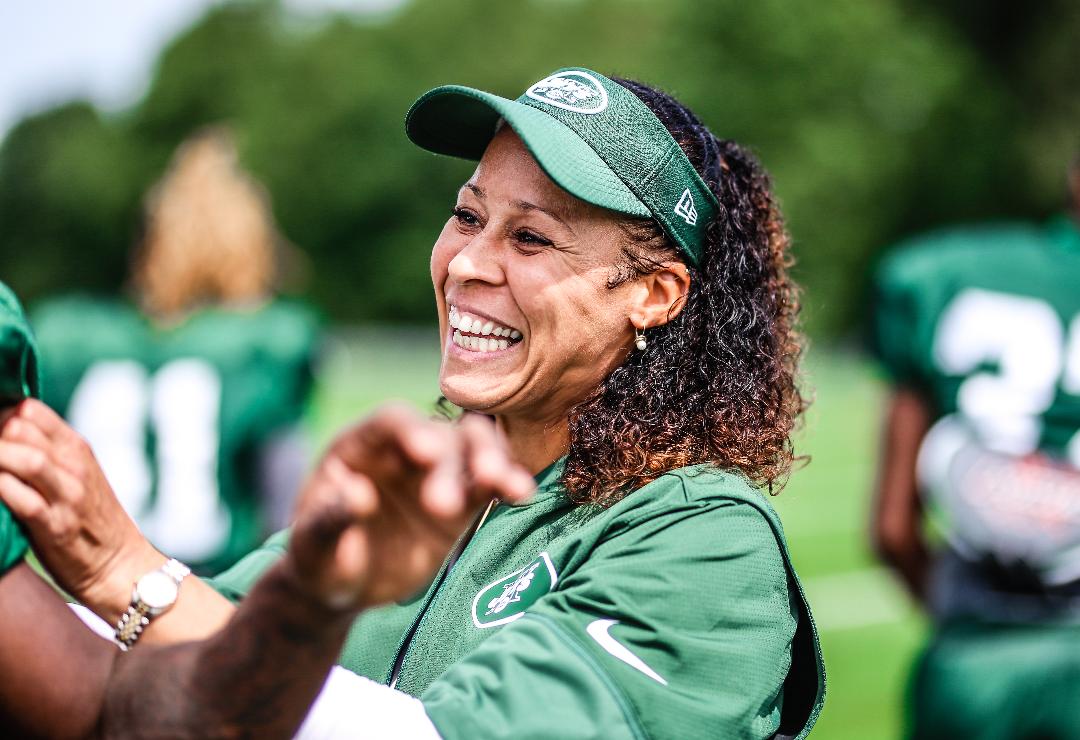 Collette has always had a true LOVE of Football but there were no programs she was aware of for women, until she heard about THE NY SHARKS, Women’s Pro Football Team and tried out for the team in 2011 as a 42 Year Old Woman. She made the team and after three years of being a player and then having to undergo double knee surgery which ended her football career she was asked by the Owner of the NY Sharks to coach her position-the Defensive Backs…she accepted.

Shortly thereafter she was also appointed to be their Director of Marketing, PR, Promotions and Events. In a week’s time Collette was sitting at the CBS News Station with the Sports Anchor being interviewed on television regarding women in football and her NY Sharks and has had many other networks respond to her efforts including NY1 News, Fox 5, PIX 11 News, Brooklyn 12 News, Verizon Fios and countless local stations, print media and blogs. Due to Collette’s efforts, Ashton Kutcher’s company, ‘A Plus’ featured the NY Sharks in a campaign to bring awareness to Lupus.

Collette as a child used to watch football games with her dad and recalls in particular the games between The Pittsburgh Steelers and the Dallas Cowboys rivalry! Her favorite team is the New York Jets, so when asked by the NY Jets Head Coach Todd Bowles to be one of his Coach Interns for their 2017 Training Camp she jumped at this opportunity knowing that it would help level the playing fields for girls and women around the world as the 1st Female Coach for the NY Jets, the 3rd Female Coach in the NFL and the very 1st African American Female NFL Coach.

She also just launched her own company October 10th, 2017 “Believe N You, Inc.”. This is a company near and dear to her heart as she visits public schools in low income and underserved communities to tell her story of hard knocks and triumphs to instill in kids to believe in themselves, dream BIG, go the distance and to never give up pursuing their dreams! She finds it extremely important that these kids see someone that looks like them with a similar background where the possibilities of greatness may seem bleak but that all things are possible if you take pride in yourself, know your self-worth and never give up. Her goal is to give them hope and encouragement to lead happy successful and productive lives. Believe N You, Inc. is also a place where companies and universities can reach out to hire her to speak at their events, run workshops and do mini football camps.

Collette V Smith was recently asked to be an Ambassador for the National Coalition Against Domestic Violence and to be their keynote speaker at their 17th Annual Conference On Domestic Violence which is also NCADV’s 40th Anniversary, this conference will take place in Rhode Island in September of 2018. Collette as a survivor herself, is a pioneer in the movement on empowering women and how we can change the world if we continue to use our voices to make positive change. Collette finds this cathartic to be involved with NCADV and to empowering our women to put an end to DV and also teach the men to do better.

Collette studied at Tuskegee University in Alabama where football is a BIG DEAL and she loved going to her University’s games but she couldn’t wait to get back to the Big Apple in hopes of utilizing her education in the city where she embraces the well-known adage of “Making it here, meant making it anywhere!”

When not playing football Collette Smith is a professional Real Estate sales associate. She is a native New Yorker and has the kind of personality that puts clients at ease the minute they meet her. People from all walks of life appreciate her vibrant, lively wit and keen business savvy. She expertly handles all aspects of buying or selling one’s home while still protecting each party’s best interests. Her consistently successful management of all aspects of these upscale corporate accounts made her a perfect fit for Halstead Property and after 10 years there she now works with Charles Rutenberg, where she applies these skills to more Manhattan Real Estate endeavors. Given her extensive experience, listening skills and buoyant personality, made her a very successful agent specializing in several multi-million-dollar new development projects over the years across Manhattan.

In prior years, Collette cultivated her interpersonal skills working for Swatch as their marketing coordinator and as a liaison for the 1996 Olympics.  She also worked for Reflections LTD boutique as a fashion buyer, CS Aviation marketing aircraft to Fortune 500 companies as well as securing prestigious hospitals as clients for paperless environment technologies at Radiology Software Companies.

Collette also is a true believer in giving back to her community as she was a Mentor with Allan Houston of the NY Knicks Entrepreneurial Program for Urban Youth. Not only was she a mentor with this group, but she has won awards for BEST MENTOR. Collette now does a great deal of community work with schools that are overlooked, in need of attention and positive role models that look like them. Her gender specific loyalty is very important to her as she sees that girls do not get as much attention when it comes to sports programs as boys do.  She emphasizes the importance of building positive self-esteem through team sports to at-risk teens. She believes in empowering girls and giving them the right tools to succeed in life both on and off the field. Her mission is to have a positive impact on the development of young girls, who will become the strong, effective leaders of tomorrow. She dedicates her time working with groups like i.e. Power Play NYC, Girls Inc. and the “Fins Up! Sports Camps for Female Athletics” as well as many other organizations. She has also ventured into having herself and her team the NY Sharks become Official Wish Granters for Make A Wish, since this collaboration many more wishes have become fulfilled for children fighting life threatening illnesses. She believes in taking on everything she encounters seriously, passionately and with great care and drive.