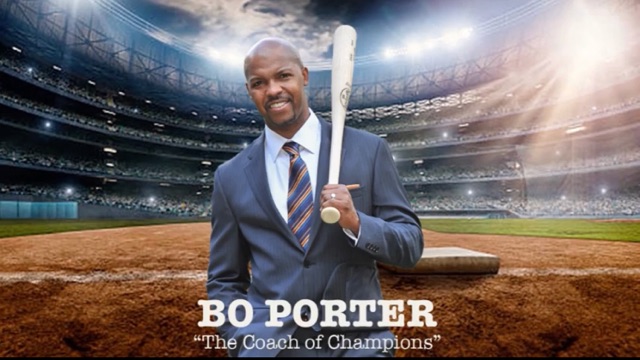 Marquis “Bo” Porter is living proof that if given a bridge of opportunity, one can reach the peak of their potential. He is blessed with fortitude, a burning desire to attain high levels of achievement in all sectors of his life, and the work ethic it takes to accomplish and sustain success. An accomplished pro athlete, MLB Executive and business developer, Bo embodies how to empower one’s life to its fullest.

Bo Porter was born and raised in the heart of inner-city Newark, New Jersey, where he faced many obstacles and long odds of overcoming his environment and the circumstances surrounding his upbringing. A true blessing from God in the form of a kind gesture from a neighborhood friend was the “hand in” and “bridge” that led to a world of opportunity for Bo.

Bo earned his Communications Degree from the University of Iowa in 1994. He was drafted by the Chicago Cubs in 1993. Bo played in the Major Leagues for the Cubs, Oakland A’s and Texas Rangers. He coached for the Miami Marlins, Arizona Diamondbacks, Washington Nationals and Atlanta Braves. At the age of 39, Bo was named Manager of the Houston Astros and at the time was the youngest Manager in Major League Baseball.

He is currently a Special Assistant General Manager of the Atlanta Braves, Founder and Chairman of the Board for the Stacey and Bo Porter SELF Foundation, Founding President of REal Excellence Inc., CEO of Bo Porter Enterprise and the author of two books REal Life EMPOWERED and The END GAME. Bo received the key to the city and was honored with Proclamations by the Mayors of Newark, NJ and Houston, Texas. Bo is an entrepreneur at heart and a true change agent. He is a visionary who creates an environment that centers around positive movements and transformational growth.